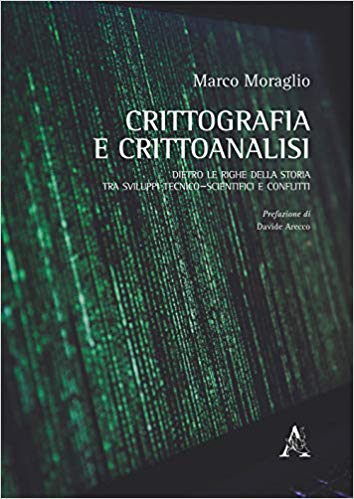 Cryptography is a fascinating subject, unique for its specific contents and for the peculiarity of the discipline.

It is not possible to isolate a place and a time in which cryptography suddenly appears.

Encrypted systems can be already found in the Bible, were frequent in the Graeco-Roman World and travelled through the centuries, straight to Alan Turing and the modern encryption techniques. And this is just the Western World!

Mankind always needed to codify messages to hide them from the common eye for either political, religious, esoteric, military or technical and scientific reasons.

Only a restricted number of people were and are able to understand secret texts and only after many attempts, putting into play their own wits.

This volume tells the story of these codes, of those who invented them, of those who decrypted them and of the world where they lived.

It is a fascinating journey which retraces the main steps of the history of cryptography, an unexploited but crucial topic which touches upon many different eras.

This website uses cookies to improve your experience while you navigate through the website. Out of these, the cookies that are categorized as necessary are stored on your browser as they are essential for the working of basic functionalities of the website. We also use third-party cookies that help us analyze and understand how you use this website. These cookies will be stored in your browser only with your consent. You also have the option to opt-out of these cookies. But opting out of some of these cookies may affect your browsing experience.
SAVE & ACCEPT